“Walk on Through”
Mural created with The Sprout Fund

I was introduced to the process of creating public art with my first mural for The Sprout Fund. In a very unique location, the mural can be seen from Second Avenue but is best viewed from the Eliza Furnace Trail. The trail itself sits between interstate 376 and Second Avenue and extends along the Monongahela River. It is an unusual location for public art because it is painted on a section of wall along the trail that supports the interstate. When painting the highest portions of the mural, I could hear and feel the traffic passing above my head. Because it was located at a mid point along the trail, this meant that all of the supplies had to be driven to the site daily. There was no way to store paint and supplies on site. I would load the paint and supplies into the back of my car and haul them down the trail to and from the site every day. It was a wonderful location to paint a mural. My favorite memories will always be painting in the evening, as I listened to the sounds of the city wind down after a day of work. The busy traffic would leave the city and travel east on the interstate above my head. The sun would begin to set and people would take advantage of the cool summer evening and give me a thumbs up as they would ride their bikes, run or rollerblade past me. I absolutely love painting outside in the early evening hours.

I worked in conjunction with Friends of the Riverfront, an organization whose mission is to increase awareness and engagement with the Pittsburgh region’s rivers and riverfronts through activities, stewardship and expansion of water and land trails. The first preliminary design featured elements that came from the first community brain storming session. In the community notes there was mention about wanting to somehow include the significance of the mayfly in the design. The mayfly’s return along the riverfront in 2003 was a sign that the rivers were becoming healthy again and the community thought it would be a fitting symbol for the area and it’s residents. A butterfly was eventually substituted for the mayfly in the final design because it was decided to be more universally recognizable and just as significant to the area.

It was a challenging design because the community wanted to show their very urban connection and their passion for it’s surrounding green environment, trails and rivers. The trail wall was also granted a legalized space for graffiti artists by former city mayor Tom Murphy. Graffiti artists were allowed space for their work as long as it contained no profanity. I thought it would be interesting to develop a design that would work with the surrounding vibrant graffiti tags that were interspersed throughout the trail. With graffiti constantly changing and evolving around the mural, I wanted to work with shapes and graffiti in my design so that it worked within the context of the existing elements already on the wall. Many people use the trail for different purposes and I though I would show that by using a continuous walk cycle but breaking the cycle down into key poses with every step being a different person.

The people, buildings, and butterflies would progress from graffiti shapes on the left to realistic images on the right during the course of the walk cycle. It was my intent to collaborate with a graffiti artist in the creation of the mural, but it was hard locating people who would admit to being graffiti artists and want to make a commitment to a public work.

The design was simplified using graffiti like shapes instead of the dripping paint, which the community felt unsure about. The abstract graffiti shape at the bottom left transformed into a butterfly at the bottom right using the colors found in the graffiti below the mural. I also pulled color into the background cityscape from existing colors found in the surrounding graffiti. New laws were eventually passed prohibiting graffiti artists to paint on the trail a year after the mural was completed. The graffiti that once existed on the trail has since been covered or removed from the wall. The mural now stands alone and I feel it’s missing a key element that made it a stronger piece.

Mural for the Sprout Fund along the Eliza Furnace Trail - 2004 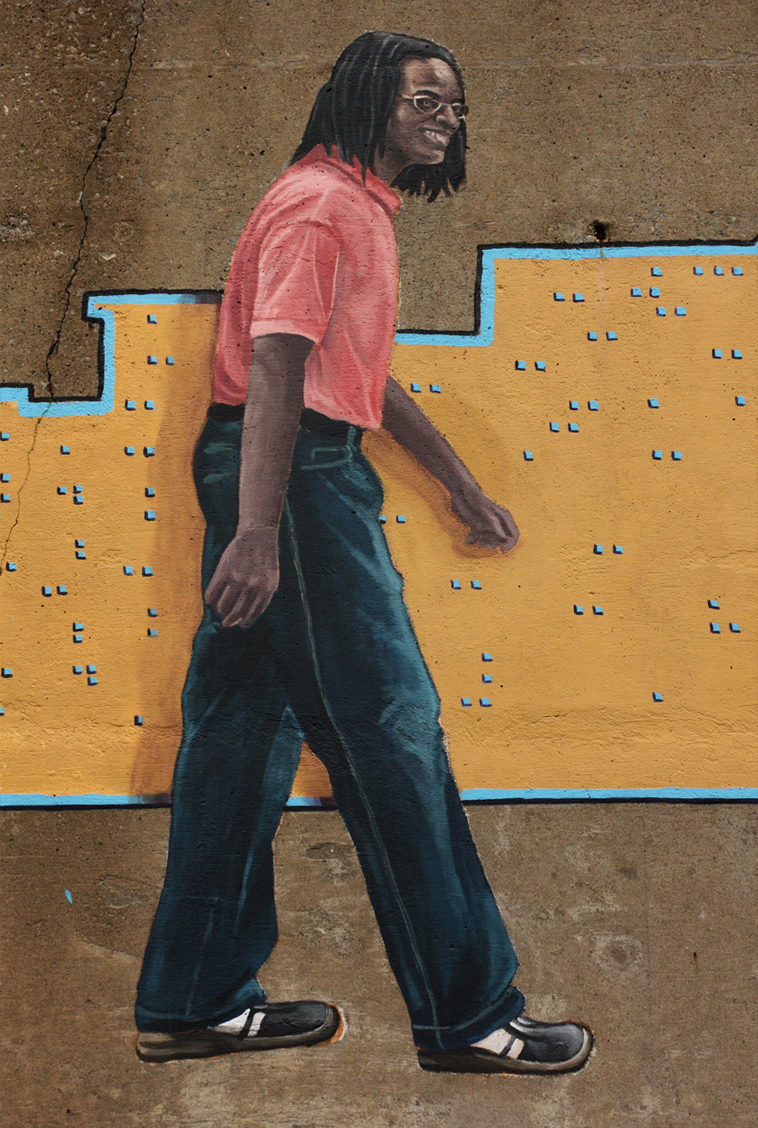 Detail of the first figure on the far left 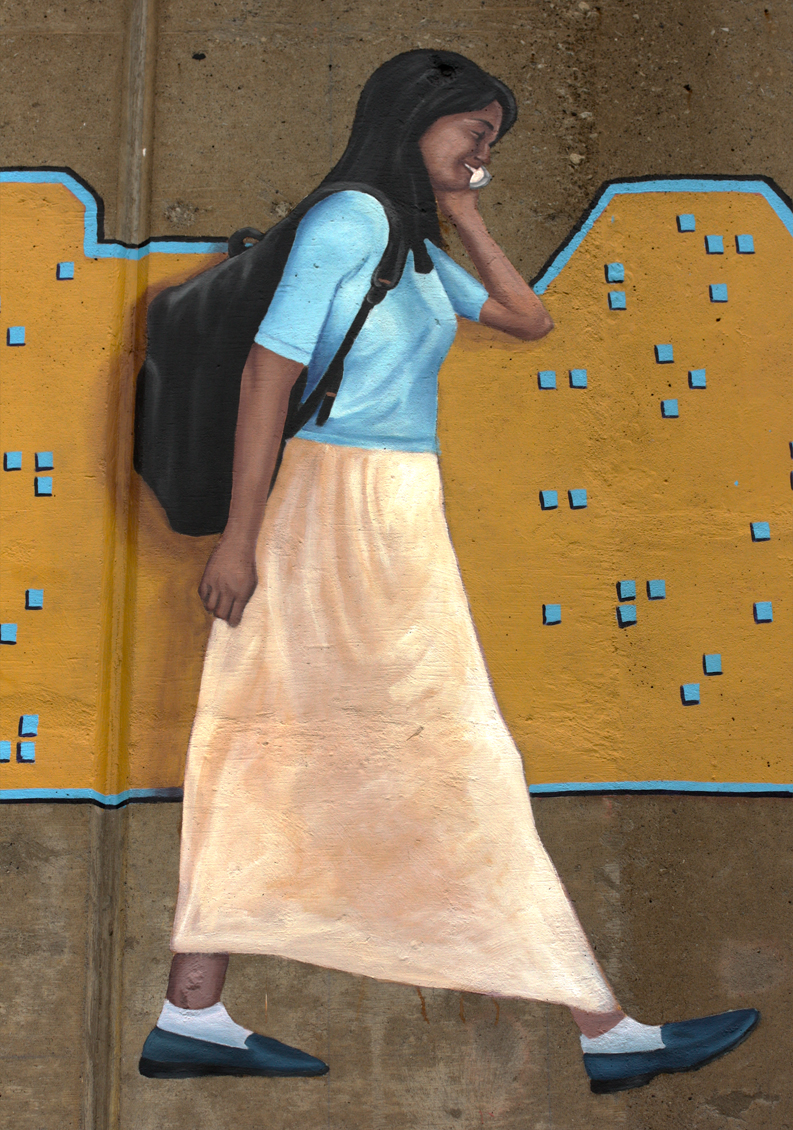 Detail of the second figure 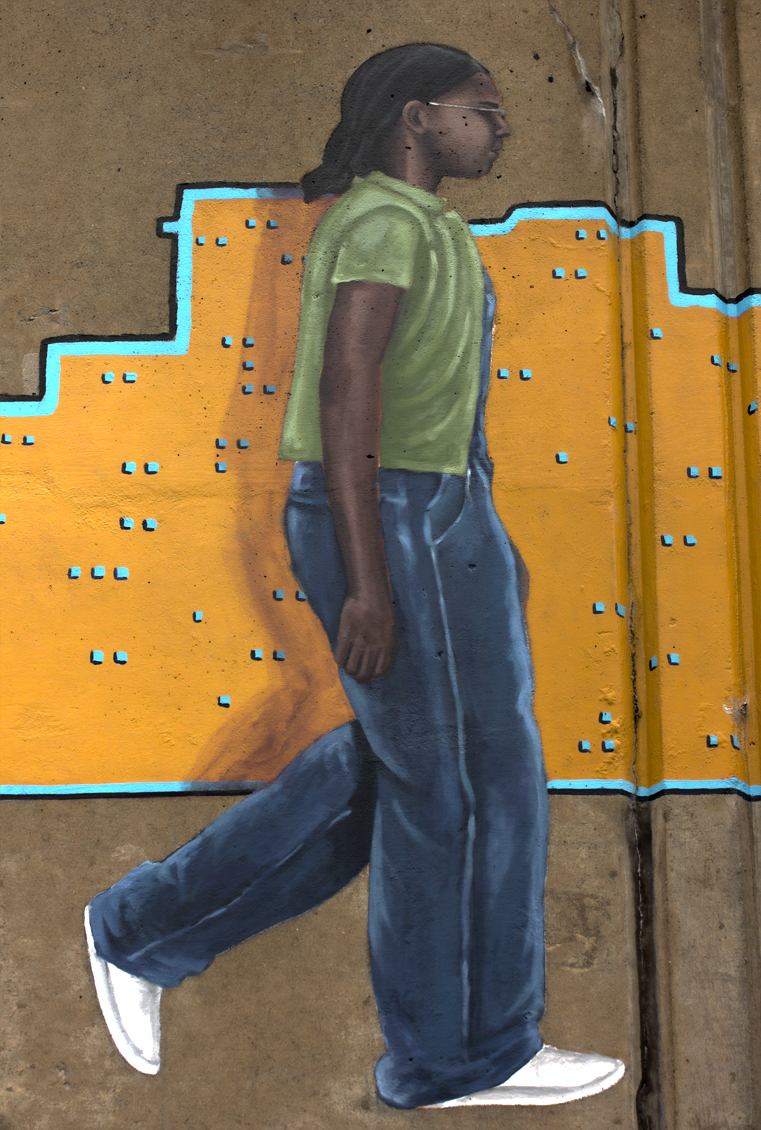 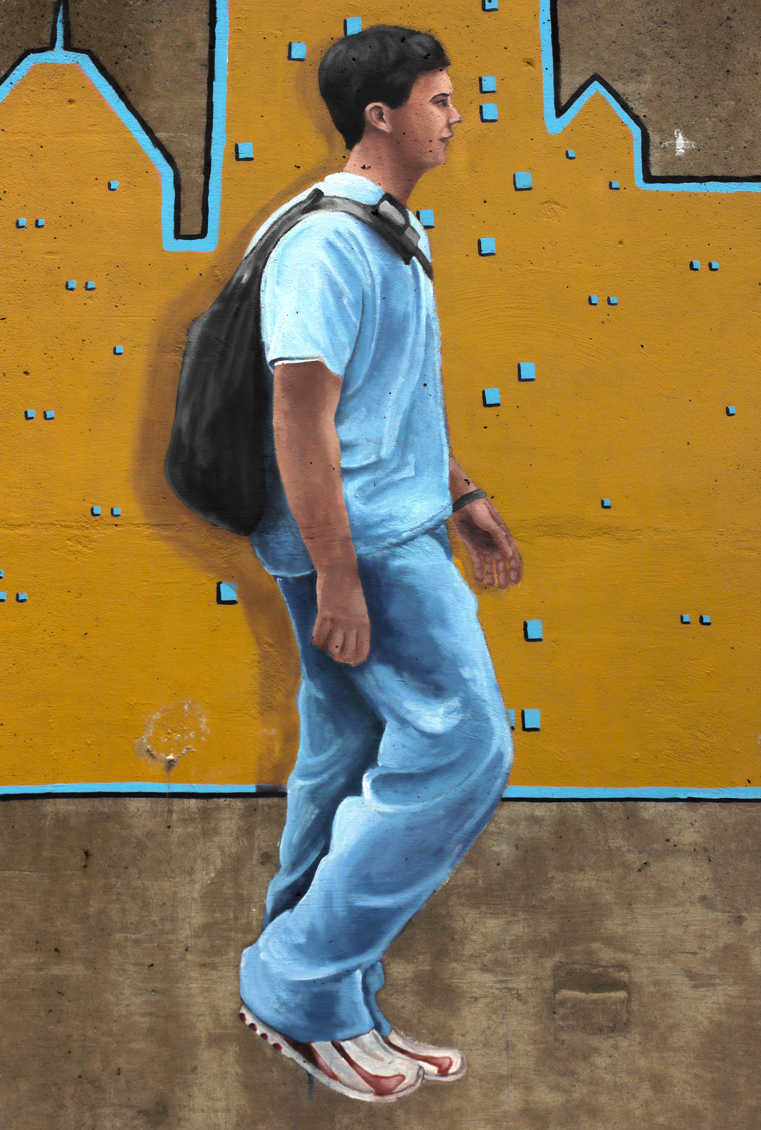 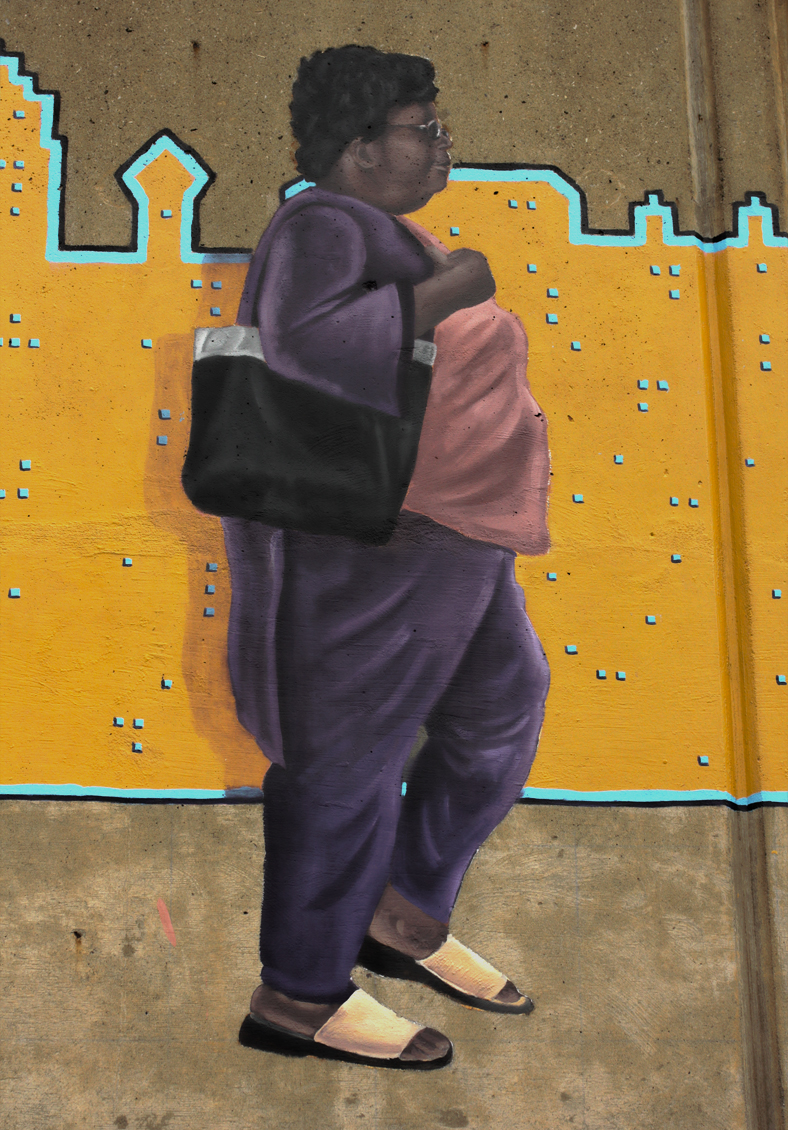 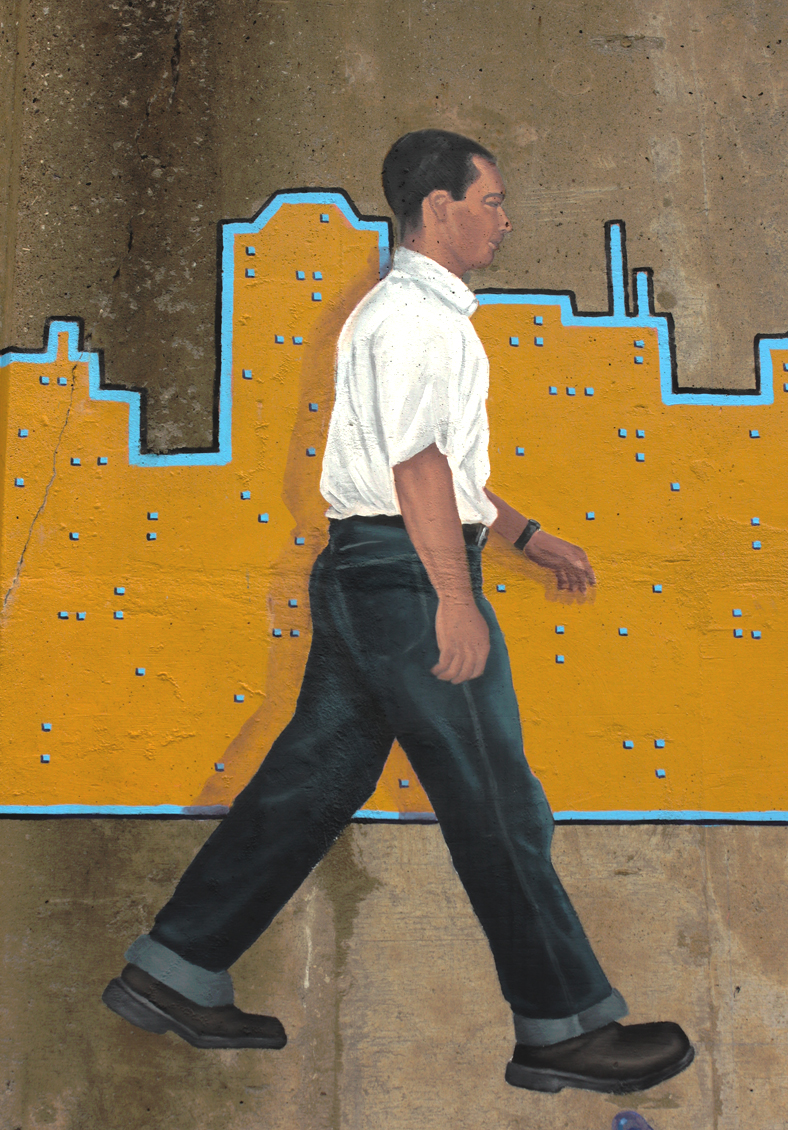 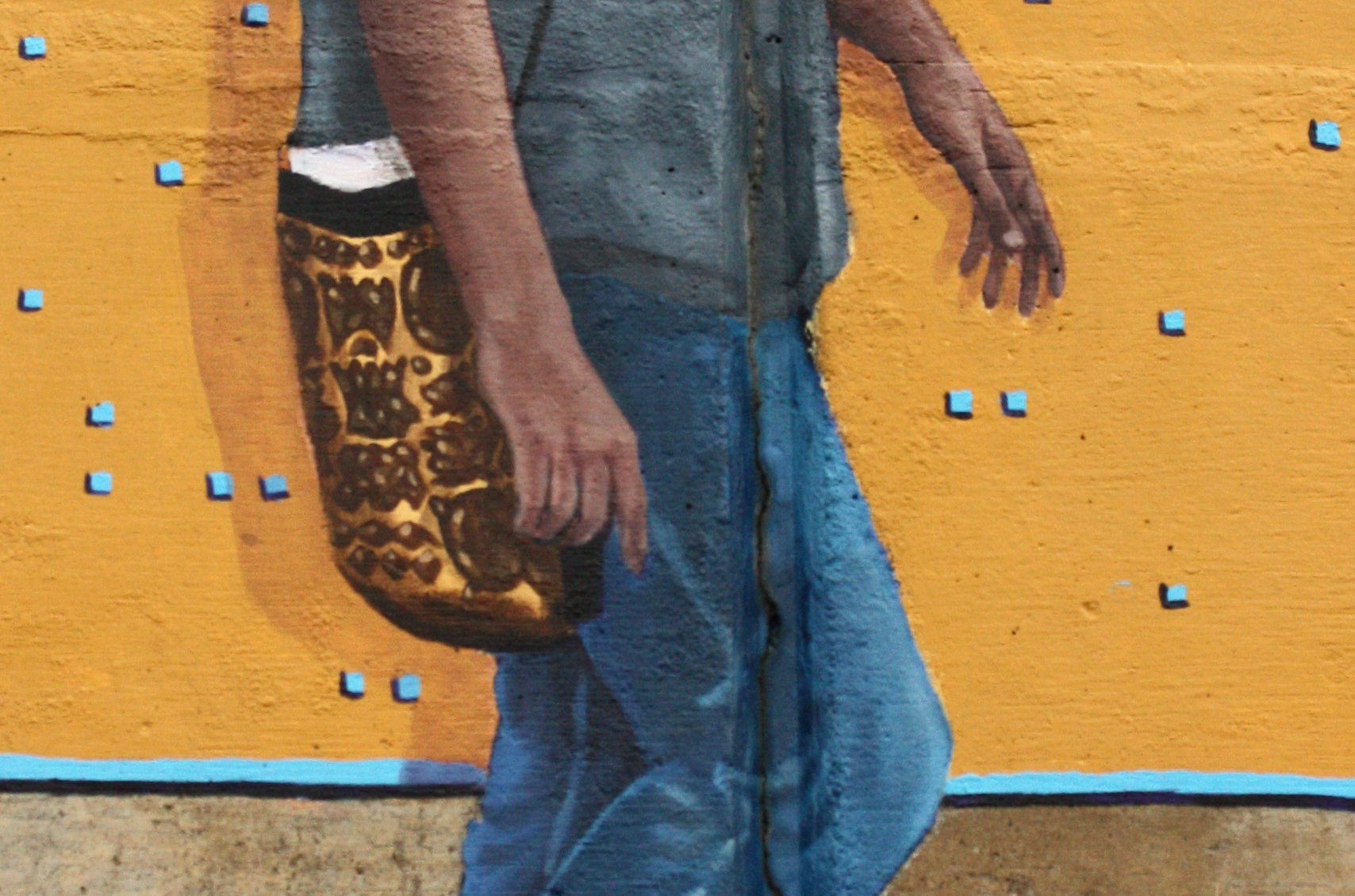 Close up of figure on far right 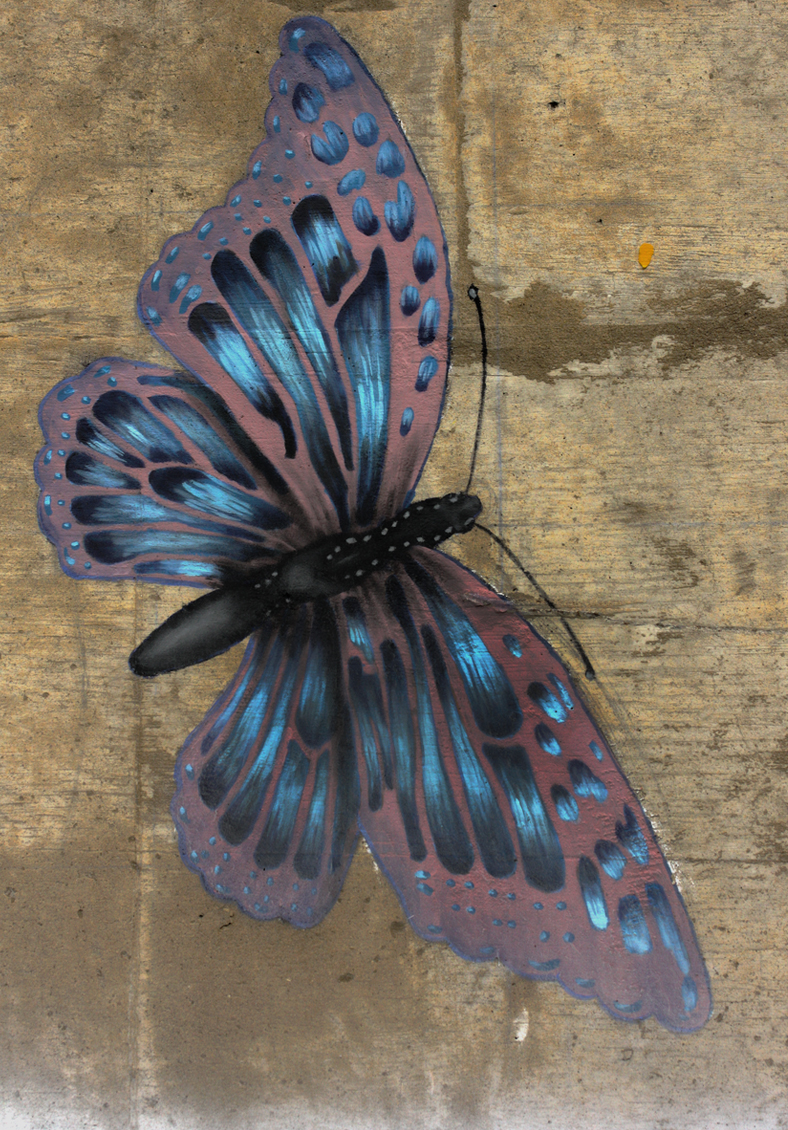 Detail of butterfly morph below figures