With this mural, I really began to understand the impact public art could have on a community. This was my second mural for The Sprout Fund and it posed many challenges. There were both challenges with the surface of the wall and challenges with the community. It was completely exhausting at times but this experience is what has made me passionate about creating public art. I had no idea that a piece of public art meant to depict a community could ignite such strong emotional reactions from its residents and bring about change.

Prior to being selected, I walked the streets of East Pittsburgh, photographing subjects and interviewing the local residents for some insight into the neighborhood to complete a preliminary design. The homes were mostly older, and it seemed like a small, friendly city community with an appreciation for its industrial past. The design notes from the first community meeting placed an importance on having some aspect of industry and the bridge in the preliminary design. I took pictures of the local community children that would play in the street. One local resident noted that novelist Joseph Wambaugh (The Onion Field, The Choirboys) spent his early years in East Pittsburgh prior to moving to California. I thought that it might be interesting to get him involved and have him write something inspiring about his childhood neighborhood. The idea of using text as a graphic element somewhere in the mural also appealed to me. With my research and first preliminary design completed I presented my concept in to the community board.

The four children were photographed in the neighborhood and stare at the viewer behind one of the bridge pylons. I wanted to show that there was a new and young future behind the neighborhoods past of industry. Joseph Wambaughs quote would be added at the top to give the design a distinct multimedia element. In front of the pylon there is a couple, painted life size, looking at the young faces of their neighborhoods future. Other subtle elements were to appear carved into the stone to the right of the couple (three lines for the rivers, shamrock for it’s once dominant irish ethnicity, etc.).

The community must have seen something that they liked. I was chosen to paint the mural but several community board members did not like the presented design. At first I thought it was the addition of the type. No one had attempted to include typography in a Sprout Fund mural before and it gave the design a modern look. The following meeting was a re-presentation of the original design followed by the first of the community and artist talks. I was told that several of the board members were unhappy with the large heads and felt that the faces were too bold and wanted more of the bridge and neighborhoods past to have a more prominent role in the final design. Several members also seemed to take offense to the two larger heads on the right side being African American. They were offended that they were painted larger than the two caucasian children on the left. It was not intended for any of the children to dominate the design, the children were merely photographed at different times, enabling me to paint some sooner than others.

I took notes from the first meeting and returned the next week with a new rough design. This rough design featured a girl reading a book underneath the George Westinghouse Bridge while looking into its past industrial landscape. For this design, the girl that I had photographed with the book was a neighbor of mine. The community board really liked this design and wanted to continue with this direction. A week later at the final community meeting I had reworked the final design with much better images but the original girl that I photographed was not available for the second time. I took pictures of a different neighborhood girl for the finished design.

When presenting the final design at the last community meeting before starting the project, several community members noted that the girl in this design was now African American. I explained that it should not matter what skin color the girl is, and that their community was ethnically diverse. The model I happened to have readily available just happened to be African American for the final design. It was clear that one gentleman in particular was not happy with the skin color of the girl. After much disagreement and discussion, it was decided that the skin or the girl should be a mixed and non-discernable tone. There were many debates and after reluctant final approval, I began the process of transferring the design to the wall.

The wall was 100 wide by 22 feet high with the majority of the surface being a rough sand stone and the remaining surface a glossy coated brick. Painting on two very different surfaces was extremely challenging and involved different treatment and preparation in order to make the design contiguous. The whole wall soaked up 27 gallons of primer. There were also electrical wires that had to be insulated in order to get close enough to parts of the wall to paint them, as well as a plethora of bees nests in the gutters that had to be exterminated.

Even though the wall itself posed many challenges for an artist, it was witnessing the display of closed mindedness of some of the community members that posed to be the biggest obstacle. I painted one Saturday during the East Pittsburgh community day. Families showed up in the parking lot and community play area across the street to picnic, play music, and engage in activities. I noticed that none of the African American children or parents attended. The following week there was a similar event that I was not made aware of. People gathered in the parking lot to again picnic and play music.

I was confused and thought maybe this was something that the community did every weekend in the summer. I approached a local woman later that evening telling her that I thought the community day was held last weekend. She replied saying that this was different and that they have their own day, meaning the African Americans in the community. I didn’t know that segregated community days still existed. I thought I had stepped back in time fifty years and couldn’t help but think what this was teaching the children of the neighborhood.

I would continued to receive comments by one man who would pass through the neighborhood in his truck displaying a confederate flag always telling me that I was painting “one ugly picture.” I climbed down the scaffolding after this happened the second time and proceeded to chase his truck with no luck. I’ve never known the identity of that man. It was infuriating and sad. I just wanted to finish the mural and move on. It was extremely frustrating to bond with all of the neighborhood children but be repulsed by the adult behavior. They were ignoring part of their neighborhood community. I started to slightly alter the final design as I was painting it. I rendered the images tied to the past with dull grey color while using saturated colors for the foreground images of the girl and flowers. I wanted to subtly give a message that people are what build and make a community, not its objects and relics from the distant past. They were honoring so much of the past while ignoring the things that were vibrant and in need of nurture in front of them.

The community had the dedication for the mural and a few weeks later I was taking pictures of the finished product when a car pulled into the lot across the street a few spaces away from where I was parked. I finished taking the pictures and walked to my car. I noticed that it was the board member who had given me all of the trouble in the world over the girls skin tone. He was sitting there in his car looking at the mural. I was dreading what he had to say now that it was finished. I walked over to say hello. He was sitting there with tears in his eyes. He thanked me and apologized for his words and actions and shook my hand, telling me that he was moved by the final mural and thought it was beautiful. I thanked him and I got into my car, leaving him and the neighborhood behind, feeling a sense of accomplishment. 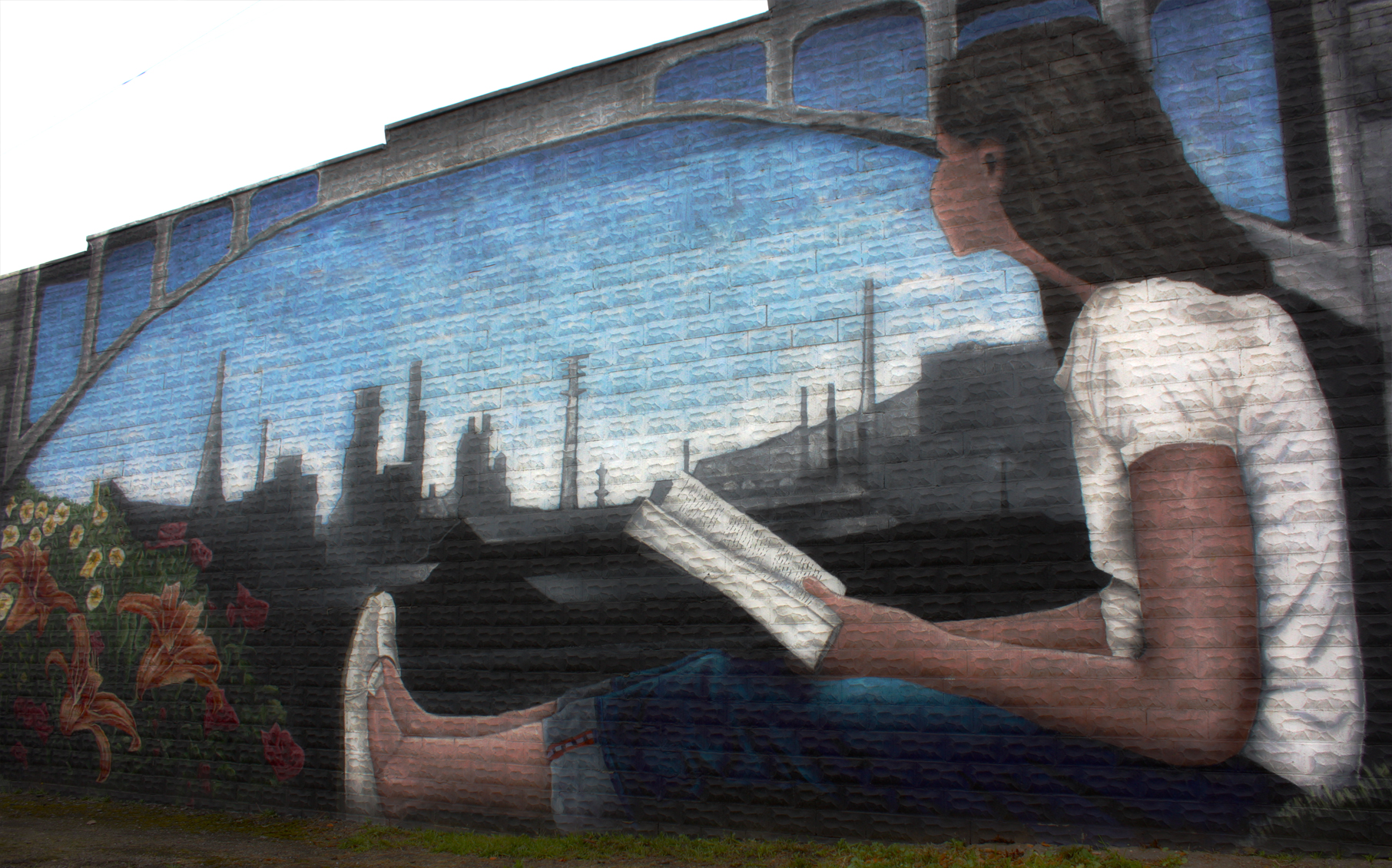 Detail of girl reading under bridge 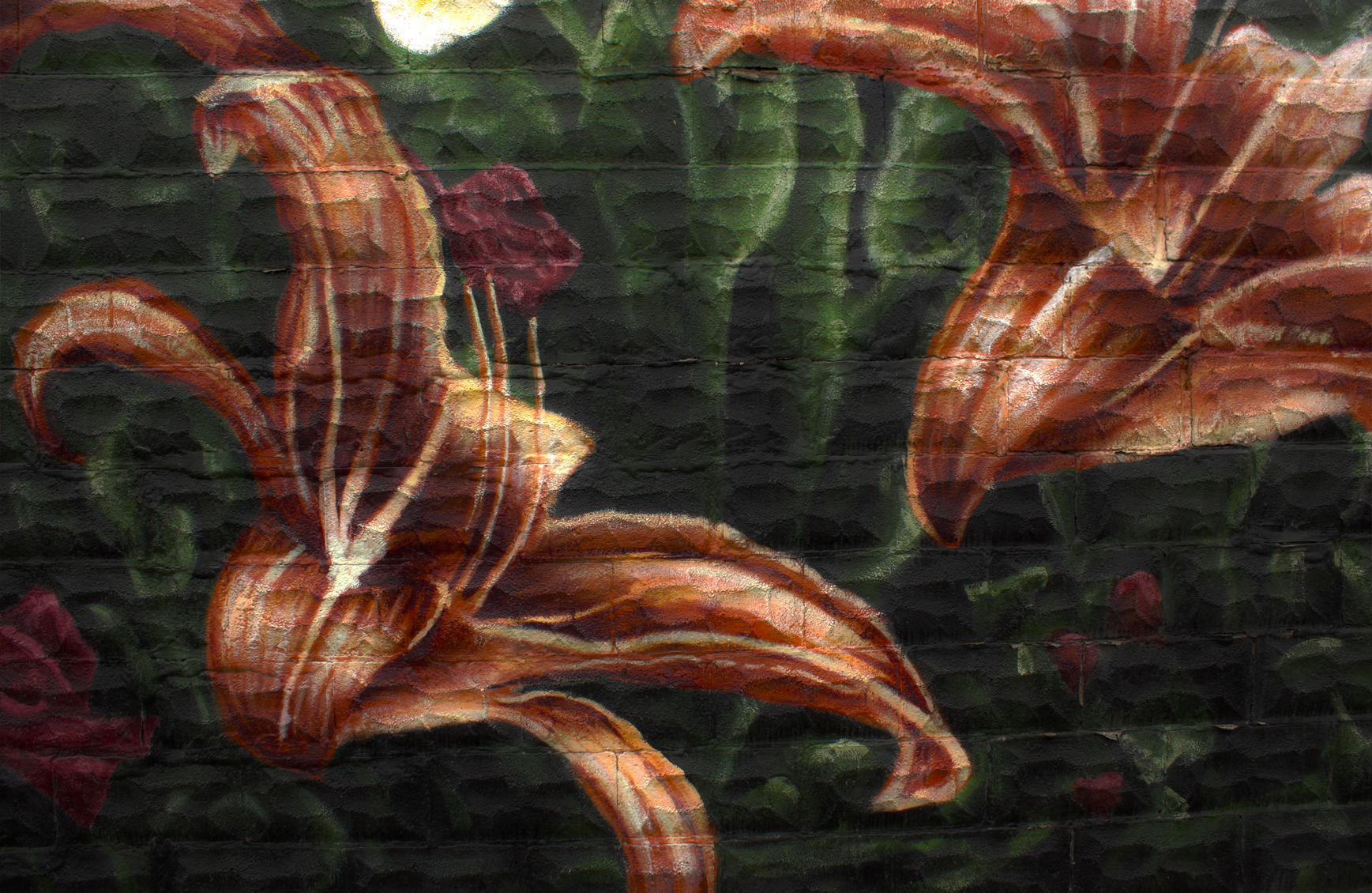 Close up of flowers under bridge 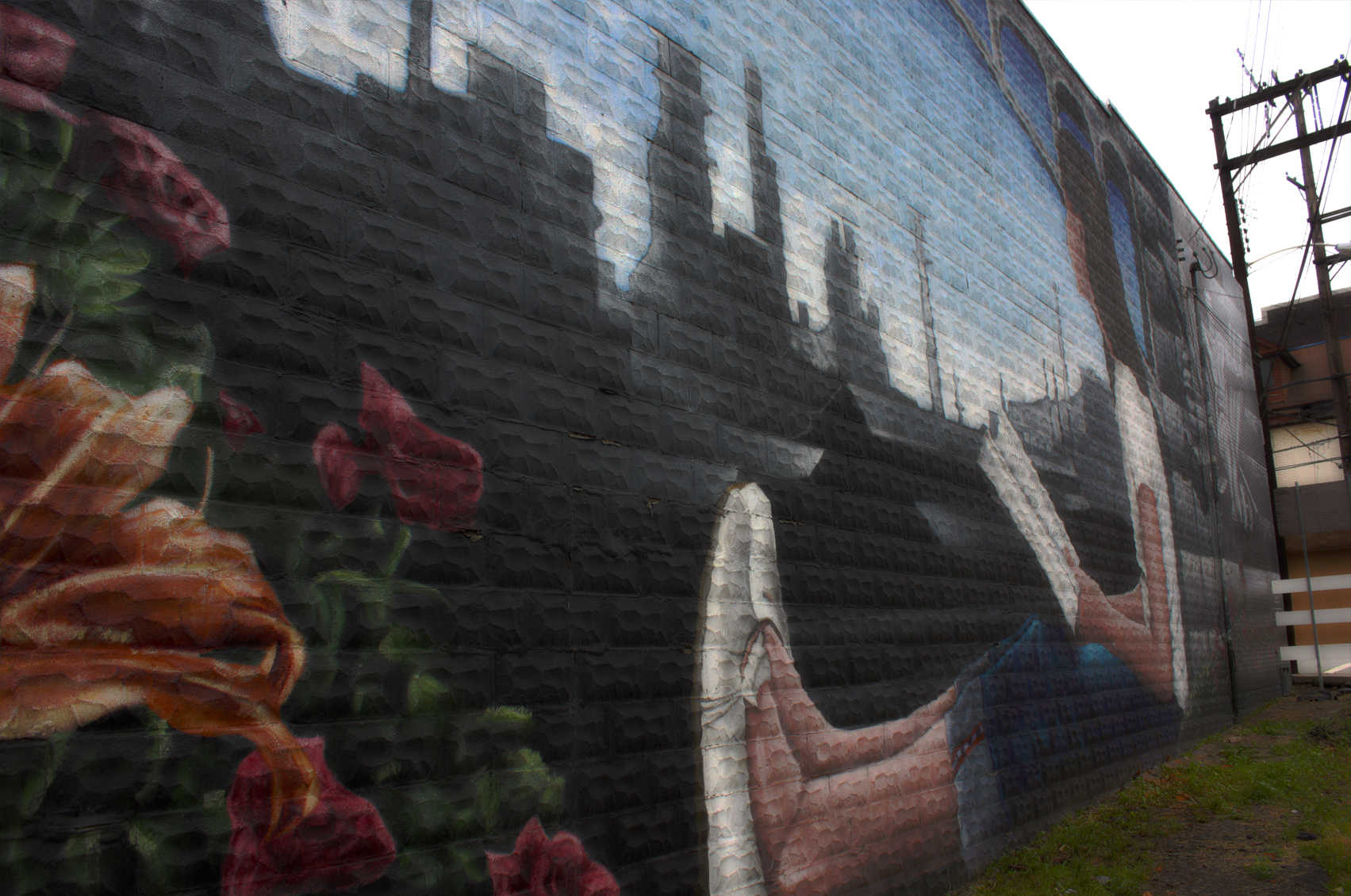 View from left side 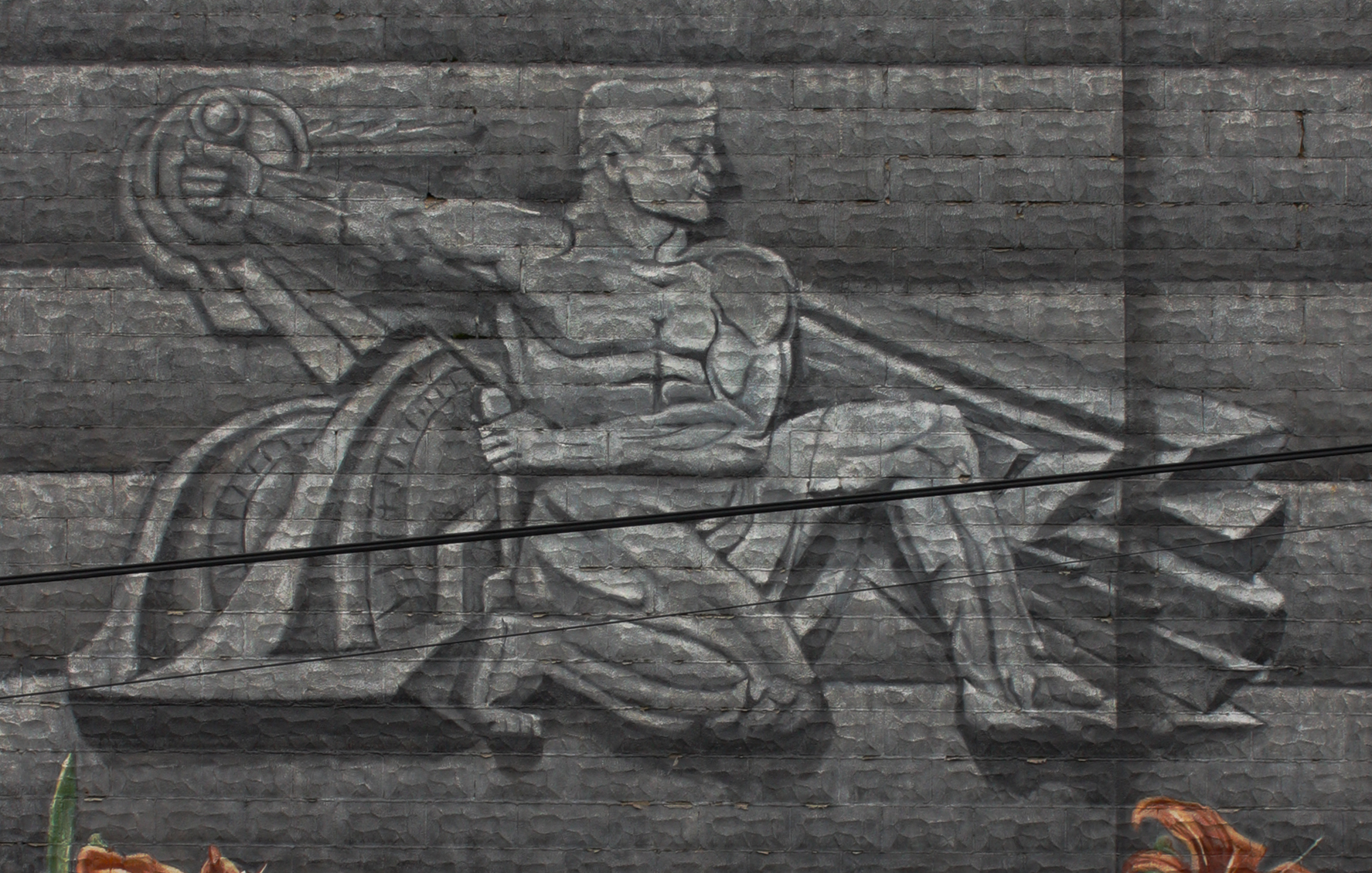 Detail of of the bridge - left pylon