“I Am Because We Are”
Commissioned mural for Duquesne University

Duquesne University wanted a mural that celebrated the mission of the Spiritans in Africa. Charles Dougherty, the president of the university, commissioned the work and wanted a central African theme showing the schools commitment to the continent and its people. My goal with the design was to depict the ideals that resonated with both African culture and at the university.

The central ideals and themes to be included in the final piece would become community, unity and spirituality. I started by interviewing several faculty members and students from parts of Africa who were either studying or teaching at the school. I wanted to get a feel for the elements they felt were most important to the culture and life in Africa. I also attended African dance and drum performances put on by the department of music to get a feel for how important rhythm was to the culture. Music and rhythm are keystone elements in all of Africa. Africa is such a diverse continent and I wanted to use symbols that reflected the entire culture. Some of the symbols in the mural are indigenous to specific parts of Africa but reflect what is important throughout the entire continent. When researching and interviewing, there seemed to be a common theme that was brought to my attention. It was unanimous that the finished piece should show how interconnected Africa is.

In all of Africa, there is a huge emphasis placed on the interconnections that the inhabitants have with one another, nature and spirit. The people celebrate these relations and there is an importance on being part of a larger whole. I looked for elements in the culture that really evoked this theme. The title, “I Am Because We Are”, came from a translation of the word ubuntu, which has its origins in the Bantu languages of southern Africa. Archbishop Desmond Tutu described Ubuntu as “speaking particularly about the fact that you can’t exist as a human being in isolation”. The word speaks about our interconnectedness and generosity to other humans and the world around us. The Liberian peace activist Leymah Gbowee translated ubuntu as “I am what I am because of who we all are”. The elements, symbols, and colors used in the mural reflect the main underlying theme of unification of African culture.

I decided that the whole piece should be symmetrical. Symmetry can be found in African carvings, symbols, and tapestries and I wanted to carry that through in the entire piece. I thought that by using symmetry, it would echo the ubuntu philosophy of equality, with no part greater than the whole. All of the elements used in the piece reflect ubuntu philosophy. The background of the piece is a large kente cloth. The kente cloth is a silk and cotton fabric made of interwoven cloth strips native to the Akan and Ewe people of Ghana, Ivory Coast and Togo. The cloth is known for its multicolored patterns of bright colors, geometric shapes, and bold designs. The colors in the painting can be found in kente cloths to mean certain things:

The Boabab tree is an integral part of the African landscape and is known as the tree of life in African culture. The symbols in the cloth also represent elements associated with the concept of ubuntu. Nkonsonkonson (the chain link), represents unity and human relations, serving as a reminder to contribute to the community and that in unity lies strength. The other symbol that repeats in the cloth, Osram ne nsoromma (the moon and the star), symbolizes love, faith and harmony. These two West African symbols stress the importance of community, love and faith.

Finally, two female figures emerge from the single kente cloth, again showing that we are all part of the whole. The cloth dresses their head and body. They are holding one another in support. Their arms form a triangle shape reflecting the universities belief in the trinity while also pointing downward to the tree of life in Africa. The figure on the left has her head down as the figure on the right reaches out looking directly at her. This is another subtle reference to ubuntu and the idea that we are not alone and may need the help of one another at points in our lives. The dove, the symbol of Duquesne, shines its rays down on the earth below. 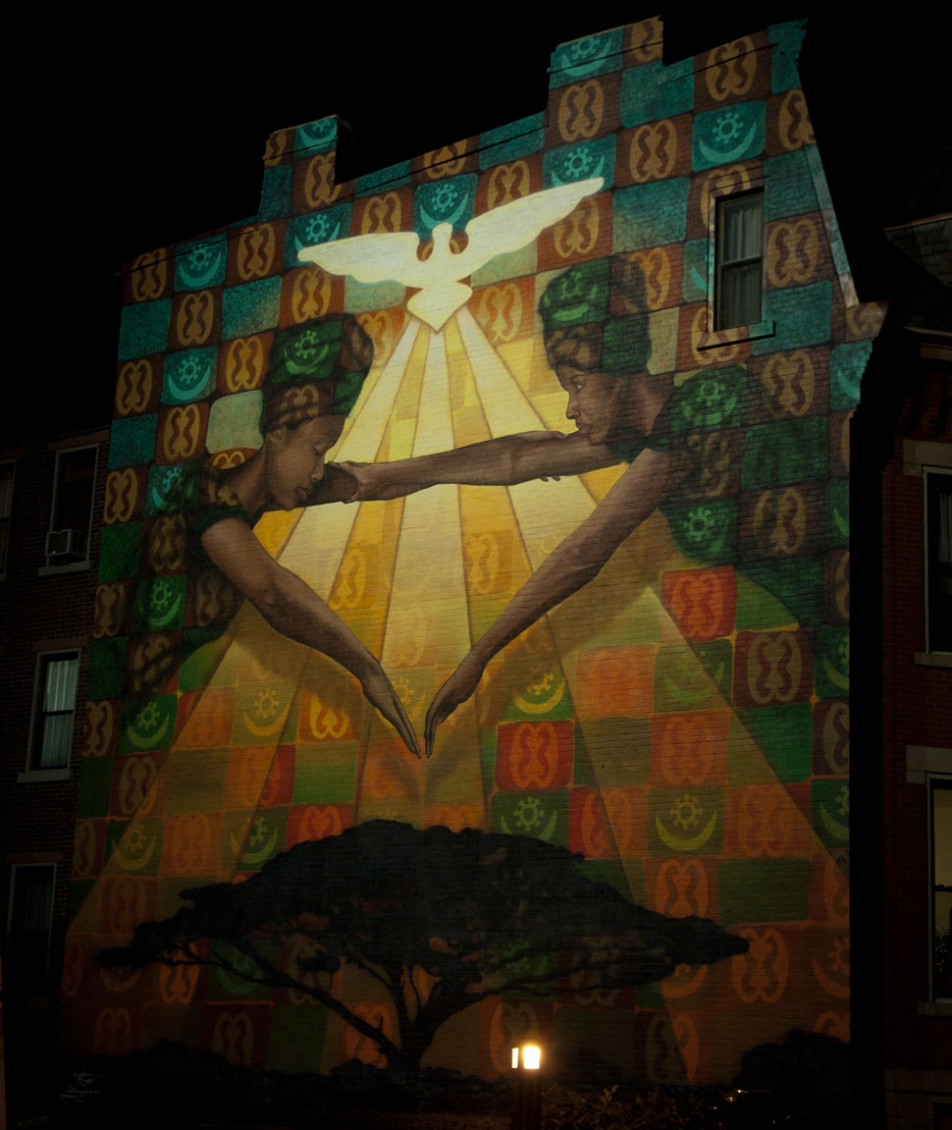 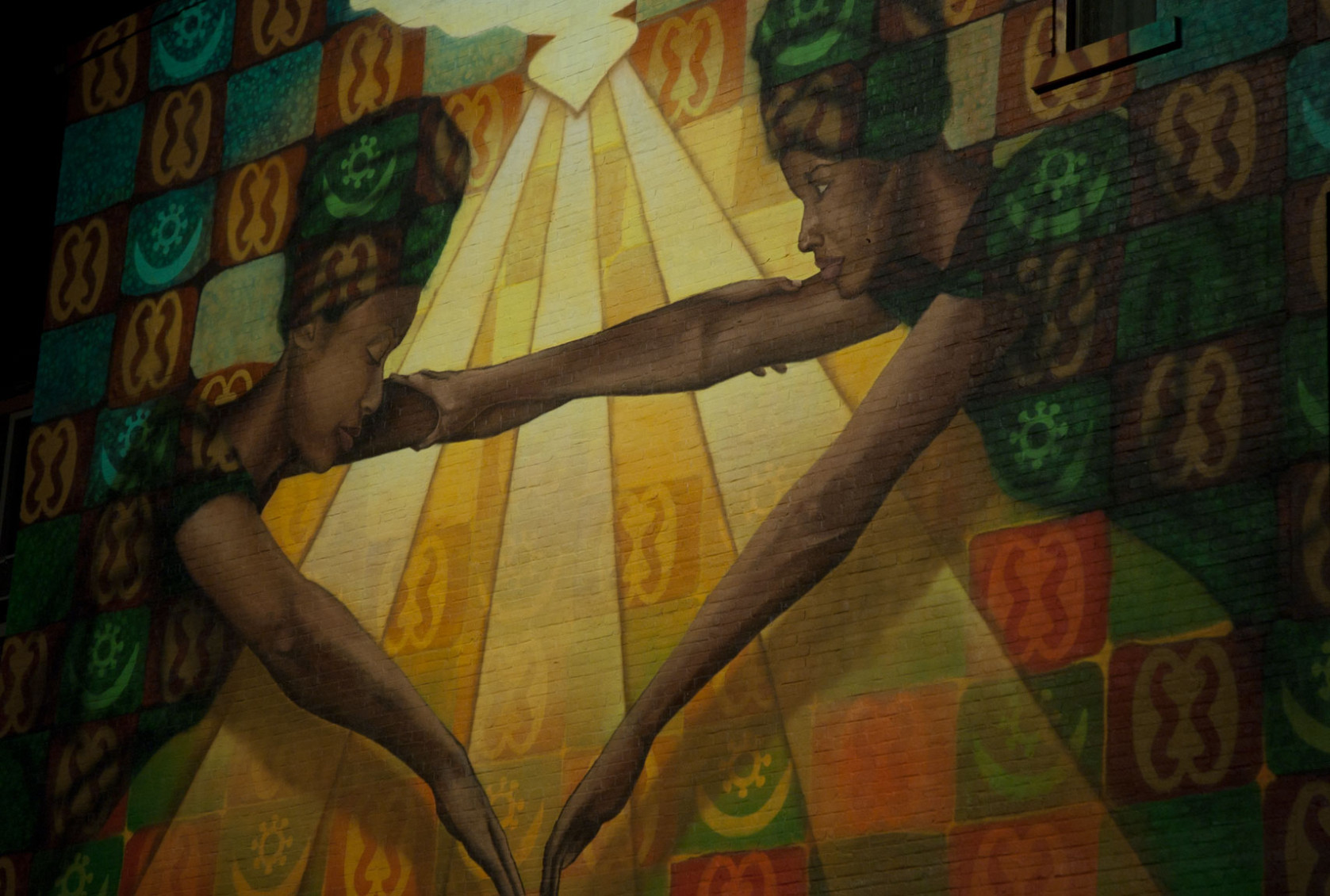 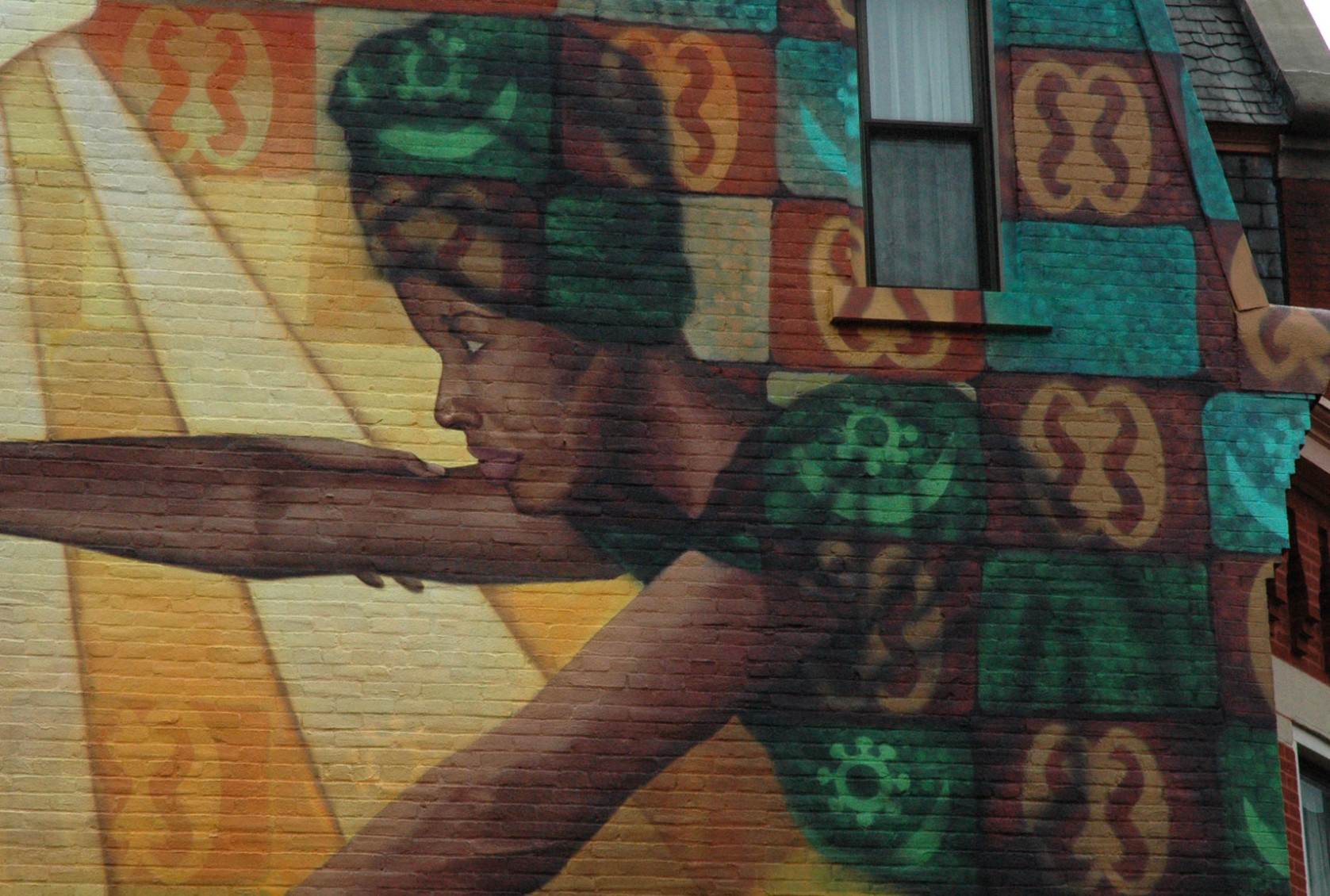 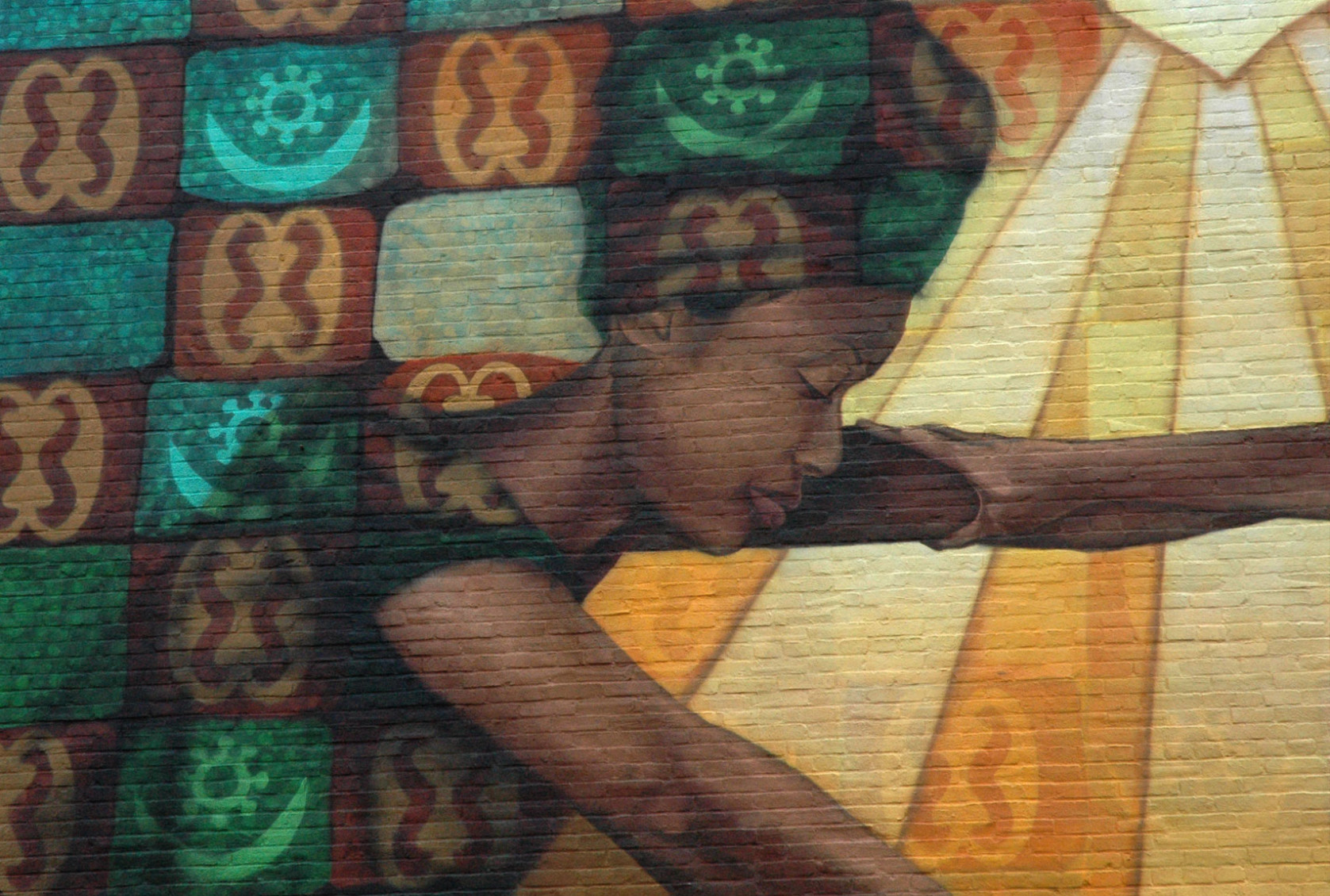 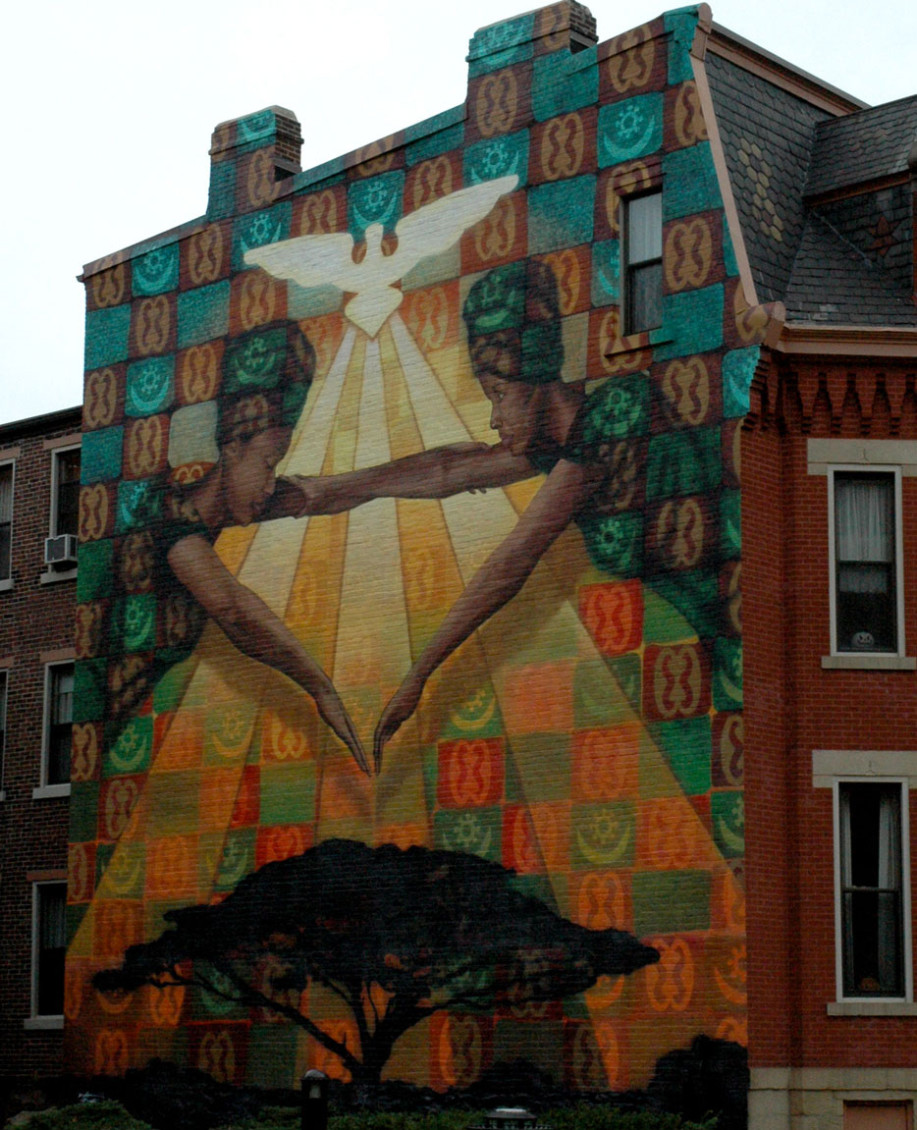